On February 25 and 26, Strate Research was invited to present a paper on the impact of Robotics and IA on the domestic environment at the London Experts Meeting organised by Home Renaissance Foundation (HRF). HRF is a think tank that has its mission to raise awareness of the home as a vital contributor to individual and social wellbeing.

This 3rd edition, called “The Home in the Digital Age”, focused on the impact of technological advance and above all the astonishing pace of change is challenging many of the values and modus operandi we have long taken for granted. In parallel with this two days gathering, other events in London tackle the theme of “home”. Among all a large and very interesting exhibition called “Home Futures” was hosted by the Design Museum in their new building.

Further on some insights from the expert meeting and some themes presented in the Design museum exhibition. For those interested in reading more on these events come and see us (Strate Research 1st floor). We can share the two catalogues! 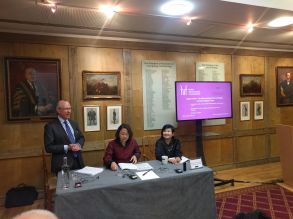 HOME IN THE DIGITAL AGE – takeaways from from the experts meeting.

Stephen Davies on the “Automation, AI, the Home and Work”: There are lots of research on the smart home or the smart house (similar almost with a residence hotel), but you don’t get enough info as home as social unit; the industrial revolution moved work out of the home, but people spend more time inside (leisure, living standards, …); the family wage: in the XIX century 1 adult (employed) was responsable of 1 home. Starting with XX century at least 2 adults are responsable for 1 home  due to high costs of homes; the impact of AI for work and homes: AI possibilities depends on conscious decisions and not technological effects. Regarding jobs & AI, according to some, whereas in early episodes it was human labor that was replaced by machines, this time we will also see the replacement of human thinking and intellectual activities. For example, white collar office jobs are going to be reduced (doctors, layers, …). This transformation will also revival the manual trades and creativity jobs; the impact of sharing economy: reduce transaction costs, household is much more significant, but it needs a regulation of use of the domestic space.

Mei Lin Fung and Deborah Gale on “The Missing Element for a People Centred Digital Future: Meet the Digital Home”: technologies are being rushed into the home, many inspired by Facebook’s motto “Move Fast and Break Things” which can potentially “break” the home’s important civilising role; a ‘digital wild west’ has emerged and traditional institutions for home safety and protection cannot protect us from attacks and losing control over home appliances, including air-conditioning and heating systems >> enforce regulations for manufacturers of digital appliances; the human need for a private place to nurture and grow, to reflect and sleep, to be safe within a family, is being sorely tested. “Home” will remain a central tenet of our humanness but it is altered by a series of purchasing decisions.

Mohamad Gamad – Contested homes in the age of cloud: the  increasing number of older people in UK & EU will lead to care becoming an essential domestic activity, with intergenerational dependency and mobility informing the socio-spatial systems of modern homes; modern technologies at home >> alter the patterns of work, care, entertainment and social engagement + maintain an uninterrupted flow of information, personal data and communications from the home to both workspace and and care-givers; homes of the 21st centuries have a critical role to sustain modern societies, where work, care and emotional support are consisting the very nature of socio-spatial patterns of the domestic space; Homes need to revisit their role of private spaces and integrate technologies that are family-friendly with clear ethical and moral principles.

Response by Homayoun Alemi : Care for elderly at home: need to push towards the right of the carer to look after their relatives within the employment law. This would reduce the burden of the social services, hospital and home care to the society as well as create a real relationship for elderly and younger generations. Home should retain an intergenerational dependency; the main thing in life for the elderly is their dignity, independence and integrity. This is why they want to be useful: and not just having passed 65 or retired to feel that their use within the society has ended; to fight their isolation we need to understand their problems: not hearing well, gaps in memory, death of friends and relatives, being embarrassed to show in public due to their disabilities and difficulties to move in public spaces; elders would like to play and unfortunately the society is geared not around playfulness or enjoying wasting time; Connected homes really does not work for them. It works for others who do not have the time to keep an eye on them; E-Health or tele-health also is mostly about cutting the costs and save the doctor or social nurse to visit them physically rather than looking after them. Most of the time they cannot hear what the computer is telling them; the only way IT or better digital technology can help is probably through AI or robots that can listen and follow the old person’s instruction, but unfortunately we are far from affordable robots to help these as well as adapting the connected home system to these robots; by creating better cities we would have better homes, as home would be an integral part of the whole which we call a city or village.

Finally the section on AI & robotics called “Homes as Human-Robot ecologies – an epistemological inquiry on the ‘domestification’ of robots” by Luisa Damiano presents different hypothesis of the human-mind in relation with technology: the extended mind – in which domestic robots are represented as humans’ extensions (the robot is for the person as the paper notebook + pencil is for an Alzheimer person that takes notes in order not to forget – the person’s mind is extended outside of her brain), and the radical embodiment – in which home robots can be seen as an integral element of the ecology of the mind (the robot is an autonomous system and in order to study its relation with the person one has to abandon the metaphor of the computer and adopt models able to characterise robotic systems as self-organising or self-producing). Between these two hypothesis, the research forming domestic robotics appear engaged in a shift from moderate towards radical embodied positions. Regarding homes, Luisa Damiano proposes the development of an “ecological ethics”: instead of prioritising the inclusion of robots into domestic environments b enhancing their networks of relations, favour design of robots as “social connectors” and empower the human-human relations inside and outside domestic environments. First ideas in this direction: look at homes as mixed human-robot ecologies, focusing on their human residents and not on the robots’ network of relations.

Ioana Ocnarescu from Strate Research, responded to this article by proposing two design approaches able to achieve this Human-[Robot]-Human ecology in which robots are social connectors, strengthening human-human relationships. One is experience design approach, focusing on people experiences and needs (in particular the need of relatedness, – one of the most salient needs in the sample of positive experiences: ‘feeling that you have regular intimate contact with people who care about you rather than feeling lonely and uncared of’) and speculative / critical design approach to challenge the ethics of new technological artifacts and open a conversation on role of technology in human ecologies. 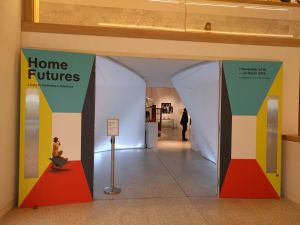 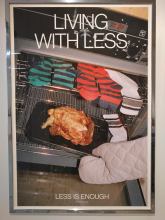 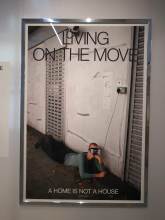 Exhibition regrouping different themes and examples that question the way we are living today through the prism of yesterday’s imagination: “Are we living in the way that pioneering architects and designers throughout the 20th century predicted, or has our idea of home proved resistant to real change?” More than 200 objects and experiences to trace the key social and technological aspirations that have driven change in the home. Historical notions of the mechanised home and the compact home are displayed alongside contemporary phenomena such as connected devices and the sharing economy.

So what makes a home ? Insights from the exhibition video: an emotional word; a place where I can find myself; people that I love are there; today it is very commercialised as an idea (not only the products inside); as designers and architects predicted in the 50 and 60, we live in a place changed by technology but in a very different way they imagined; machines are doing chores for us, but we found other machines that we do chores for; homes = home ownerships? it’s a fiction, people’s values are changing towards stuff, people value more having access rather than ownership; maybe your home is only your home at night, and during the day is somebody else’s home; treat home as an universal human right; how to make your personal home into a shared home? where are the news ideas on home? given away to timidity and fear ?

Here is the video presenting the exhibition: https://designmuseum.org/exhibitions/home-futures

Hope this tackled your interest on the matter! See you soon!